What follows is a report produced by comic workshop leaders, Anna Pesonen-Smith & Christopher Smith in March 2015. The report is part of the Comic as a Method of Multicultural Pedagogy course that we attended through Tampere Summer University in the autumn of 2014.

On Thursday the 19th of February 2015 we (Anna Pesonen-Smith and Christopher Smith) held a Comic as a Method of Multicultural Pedagogy workshop for a class of 13 to 15-year-olds at an all-girl school in India. The school fees are nominal and the pupils come from disadvantaged backgrounds.

The reasons for holding the workshop were threefold; firstly, in order to complete the Tampere Summer University course we had attended the previous autumn in Finland, secondly, to help give the girls a platform for telling their own stories and voicing their own concerns in their own community and thirdly, for us to have the experience of holding such a workshop.

What follows is an account of how we prepared for the workshop, what happened during the session and finally, our reflections on the outcomes and challenges of the workshop.

Anna having previously met with the school principal in 2008, we already had a tentative contact in place with which to use for making the arrangements for the workshop during our two-week long stay in Calcutta. On Monday the 16th of February we visited the school, met with the principal and informed her of our proposal to hold a three-hour long workshop aimed at giving the children the chance to produce their own wall comics which explored social issues of their own choosing. We provided her with some background information about the World Comics project and our own pedagogical studies in Finland.

The principal agreed to our plan but put a cap of two-and-a-half hours on the workshop, rather than the three we asked for. We enquired about the English language capabilities of the pupils and were told that they would not speak English well, but that there would be one or two of the school’s teachers on hand to aid us. Regarding the number of pupils, it was informed later that there would be approximately 25 of them, which roughly fell within our understood remit or 12 per workshop leader. On the day there turned out to be 23 pupils and two assisting teachers.

As a thank you to the school and to the participants, we offered to supply all the relevant equipment needed for the workshop and leave it behind with the school and children afterwards. We patronized a small local stationary shop, buying the requisite amount of pencils, felt-tip pens, sharpeners, rubbers and paper.

We had brought with us the templates needed for the practice and final drawing, as well as English language guides as supplied to us during our own workshop in Finland. Again, we used a local copy shop and made enough copies of those templates as well as an additional workshop guide to be left with the school in case they would be interested in conducting the course again in future.

Then we made a list of the content of the workshop, from introductions to final group photograph and allocated what we felt was hopefully adequate time for each activity. We also divided up the tasks, so that Anna would lead some sections and Chris would lead others. Whilst one was leading, the other would either help distribute materials or document the proceedings by taking pictures on the iPhone.

Knowing  that time was limited, we tried to be as much as possible to both strict with ourselves and the pupils about not lingering too much, as well as flexible about readjusting the allocated times as and when it appeared absolutely necessary.

Our first task was to introduce ourselves and at the same time, get a sense of the pupils’ English capabilities. It became clear immediately that their English was for the most part at such a rudimentary level that we would have to lean on the two local teachers to help translate and clarify what we were doing.

At this stage we understood that it would have been so easy to get sidetracked by talking about Finland or ourselves, but we stuck to the task at hand and barrelled on into the comic workshop.

The first task for the pupils was for them to divide into smaller groups and come up with a few social issues that they see around them that they care about. We took great care to not suggest any examples, so as not to lead them in any specific direction. After a couple of minutes, we started going round the groups collecting their ideas and we wrote them on the board for everyone to see. The ideas ranged in scale from very local issues (for example, the lack of a school bus) to much wider issues that affect the whole of Indian society (such as child labour). 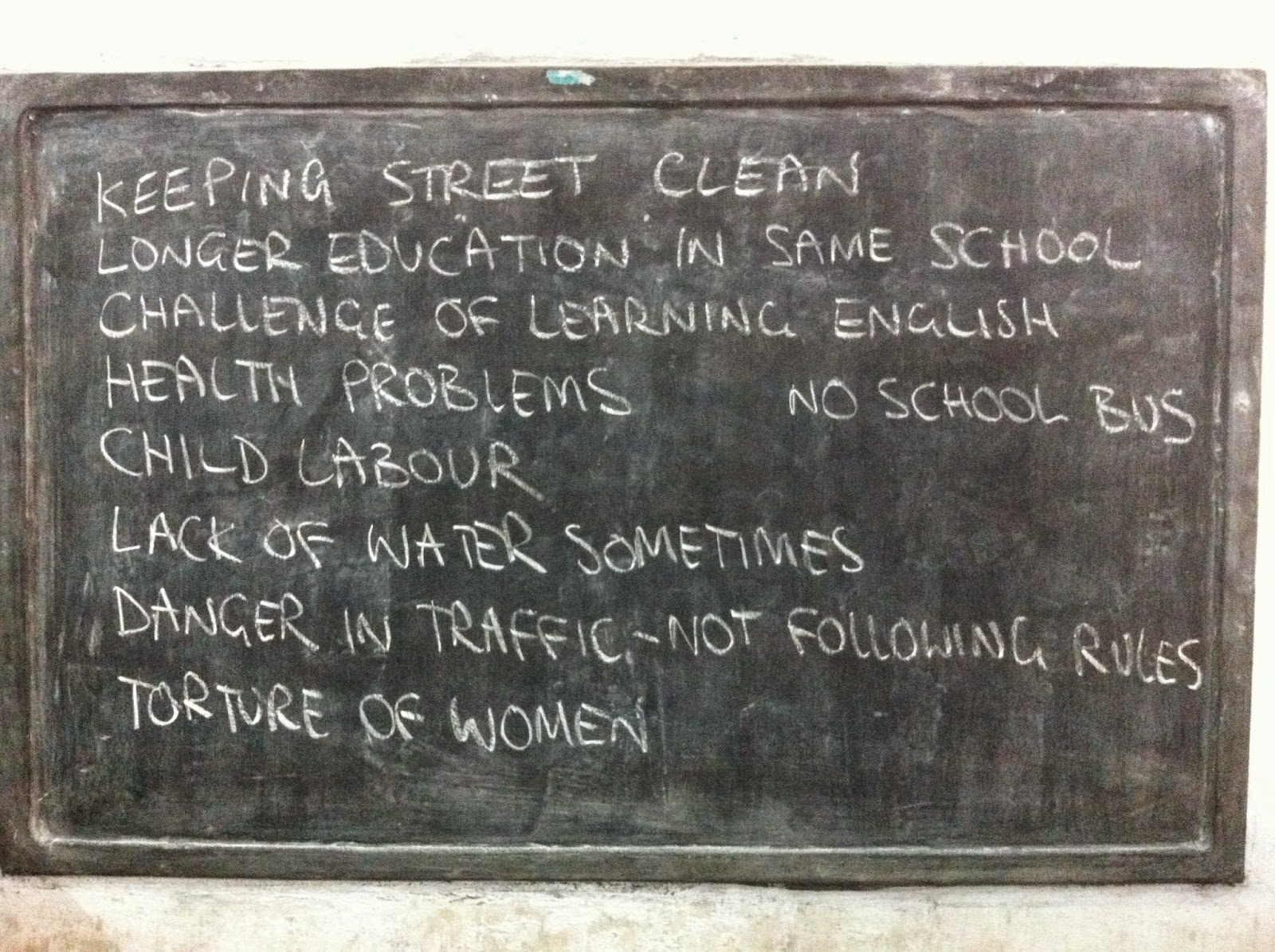 We realized that using the assisting teachers as translators, whilst a necessity, also had its drawbacks. The teachers themselves seemed at times unwilling to communicate fully and immediately to us the pupils’ social issue examples. One pupil wanted to raise the issue of there being no water available and the teacher, after some deliberation, informed us that the pupil said there was no water sometimes with very heavy emphasis on the “sometimes”. It wasn’t clear that this was exactly what the pupil was saying. The only thing understood by us was that she was using the world “water” both in Hindi and Bengali.

Having constructed the list of issues, we distributed blank paper and asked the pupils to make a large cross and, choosing one topic, start creating a story about that topic in four parts, though just with language. A couple of the pupils were able at this stage to write in English their ideas. The rest wrote in Bengali and we had the teachers translate for us. In order to help them understand this idea, we chose one of their topics, the lack of a school bus, and demonstrated how that could be turned into a story. A few pupils copied this idea with varying degrees of personalization.

It became clear at this stage that there would be a wide range in quality of the stories coming from the group and also that it would be difficult in the time-limited circumstances and with the language challenges, to perform adequate and fairly distributed quality checks. However, we did our best and aimed to mobilize those pupils who were more advanced to help those around them lacking in ideas or ability. 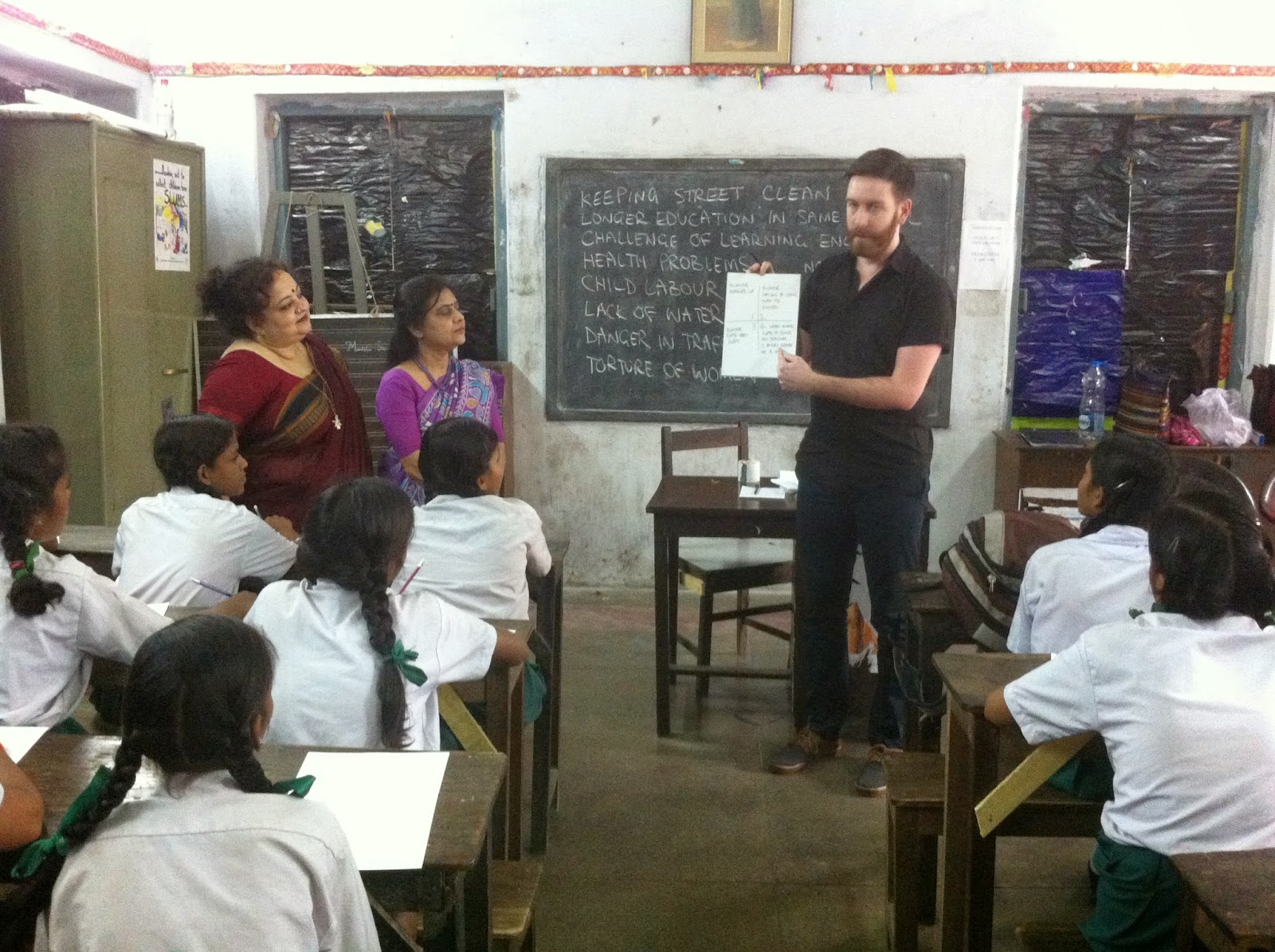 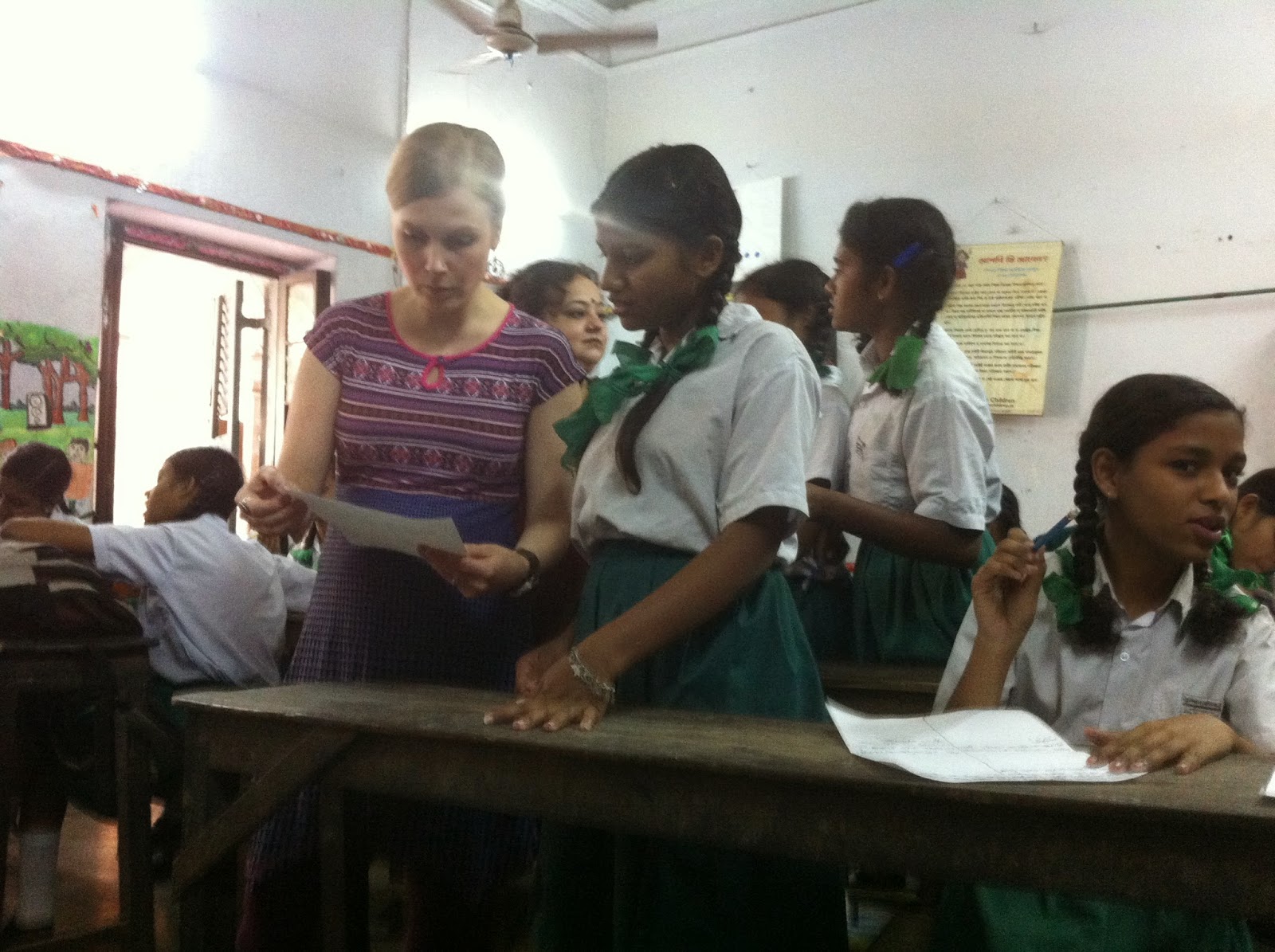 Next we gave a short How To Draw tutorial, demonstrating how to turn a stick-man into a more fully-realized human shape as well as how to convey basic human emotions through drawing facial expressions. We didn’t have time to let the pupils practice this, so they had to jump in at the deep end and start drawing their stories in the small-format templates we provided.

Having created their drawing concepts, we moved them on to recreating them in the final, large format templates, first in pencil and then eventually in ink, whilst adding titles and their own names to the sheets. Taping them together and fast running out of time, we came to the end of a hectic two-and-a-half hours with everyone having a completed wall comic.

As stated above, the quality of the comics ranged from incredibly interesting, socially relevant, well-told and well-drawn to utterly lacking in story or representation to the point that there it was questionable whether the pupil understood what had been happening during the workshop but had at least had some fun drawing some characters on paper.

The workshop being held in the afternoon meant that when the bell rang for the end, the students finished their own school day and quickly became keen to leave for their own adventures. This meant we were unable to have a clear feedback session where the pupils would look at the work and discuss it. Given the language challenges, this would anyway have taken a very long time to implement. Some pupils left with their own comics and others left them to the classroom. Those ones in the classroom we could right away hand over to the principal who promised to display them in the school as part of an exhibition. Those pupils who took their comics home would be requested to bring them back so they could be added to the exhibition. 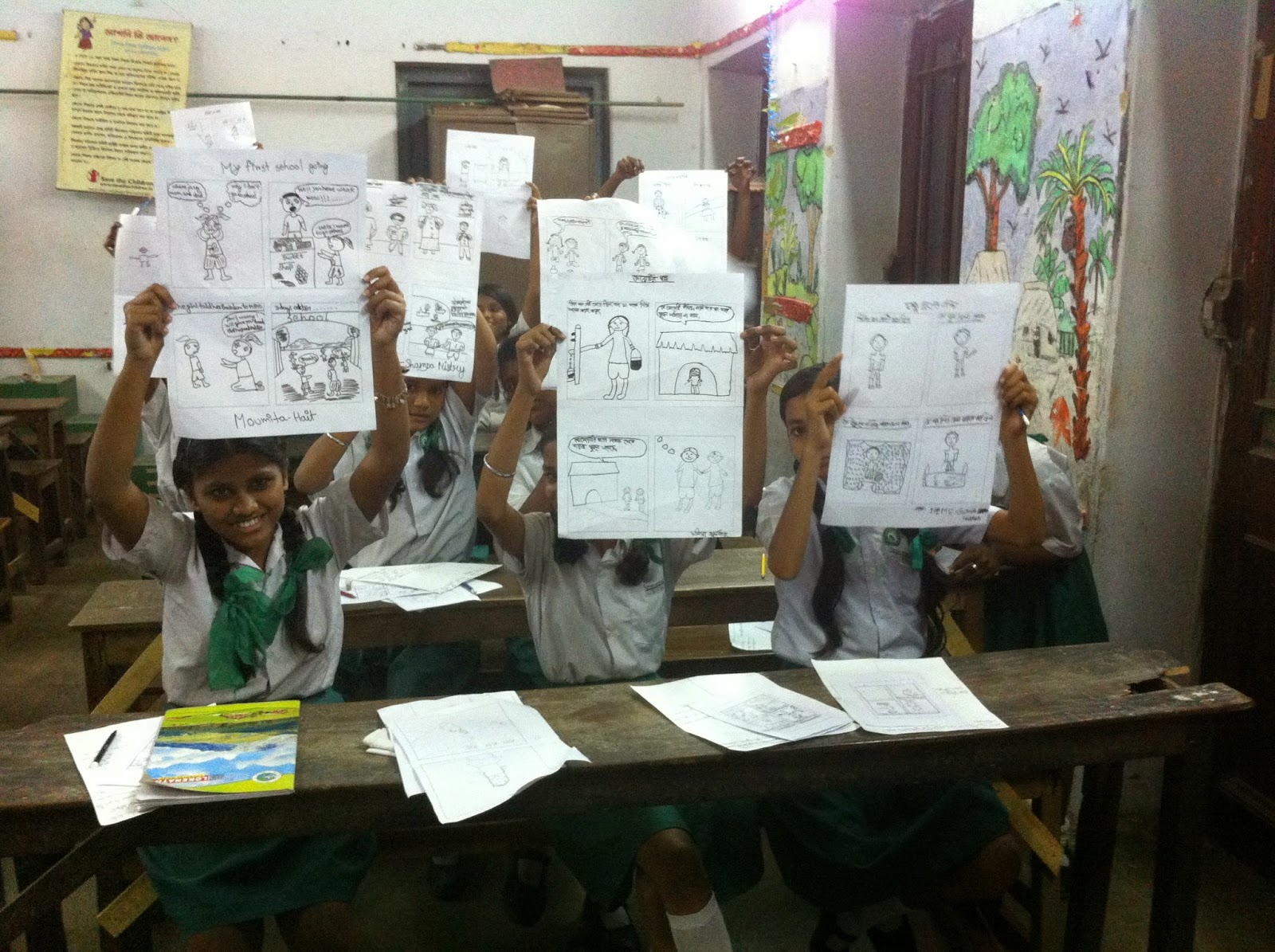 We received feedback from the teachers, pupils and the school principal that the workshop had been a surprising success, that the pupils enjoyed it and that it would even be nice to have something similar in future, through for a longer period. One of the teachers stated that she would be happy to use the comic drawing method in her English classes.

Our own experience of hosting the workshop was one of excitement, mayhem, productivity and fun. It was ultimately very rewarding. Below are some remarks about lessons learned from our side concerning holding a workshop such as this.
Two-and-a-half hours isn’t enough. Three would be better, but also tight. Then one has to think about how much stamina and attentions the participants have if it would be longer than three hours.

Keeping a balance of strictness with the time as well as some flexibility on the move was essential for this to have worked as well as it did.

23 pupils who almost all don’t have the requisite English skills is a massive task for two workshop leaders. In order to perform adequate quality control, half that amount would have been better.

Whilst having someone to translate might sometimes be necessary, vetting or preparing the translator beforehand would also be useful, to reduce the risk of them filtering what the students are saying.

Keeping a positive attitude during the whole process is essential. If one starts to become stressed or frustrated, it can easily become sensed by the pupils and they will become less at ease. We feel we were able to do this well.

Conducting the workshop as a pair was very nice. Having someone else to share tasks, support and consult with during the process was incredibly useful.

We would be happy to run this kind of workshop again. 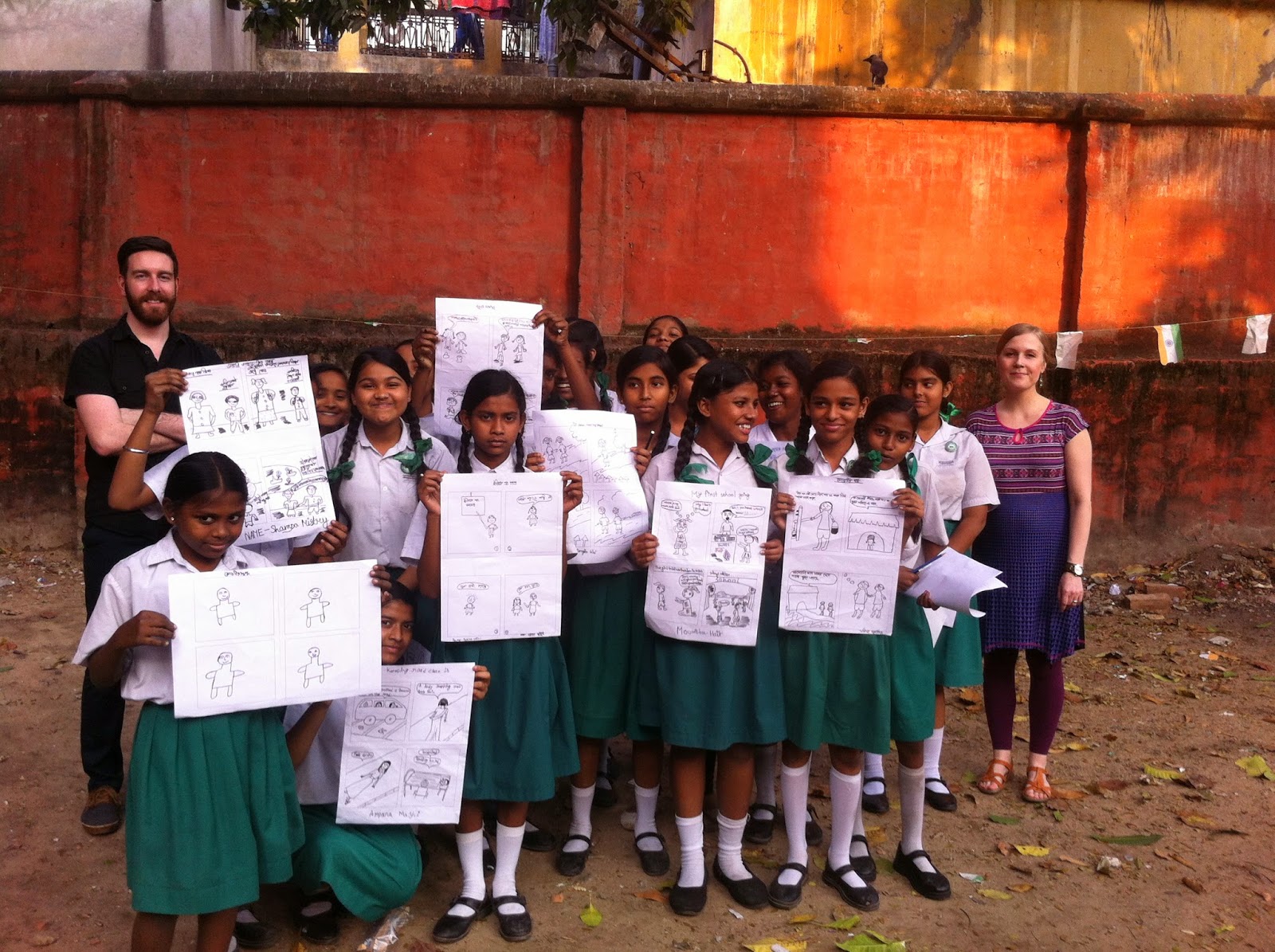